This summer, my goal was to get out on the water more- in some kind of watercraft. By the end of the summer, we had done a kayaking excursion, a pedal boat and two canoeing days- pedal boat and canoe with children. Our big winner out of this sampling menu was canoeing on San Pablo Reservoir. Read on to find out why.

Let me first say that I am a little bit of a scaredy-cat around water with kids. The four year old has been taking swim lessons for three summers now, and this is the first time I felt fine with taking her out on the water. I love the water but have a healthy respect for the danger it can pose. That said, you could take kids out in a canoe who are even less water safe and probably be fine.

San Pablo Reservoir is on the east side of Wildcat Canyon Regional Park, connected by trail to Kennedy Grove & Briones Reservoir. It’s a very popular park for picnicking on the weekend, and if you wanted to do a nice hike followed by a picnic on the water, this would be your place.

San Pablo Reservoir is also a great beginning place for getting out on the water, though. They have pedal boats, canoes & kayaks— all for the very low price of $10/hr for the first hour (goes down with each additional hour, and there’s a $7 parking fee on weekends). This is half of what one would pay at Lake Chabot, and means you can take three people out on a canoe for less money than going to a movie. (If you can get the grandparents to take your kiddo(s) out during the week, they have an even CHEAPER price for seniors– $5/hr during the week!) 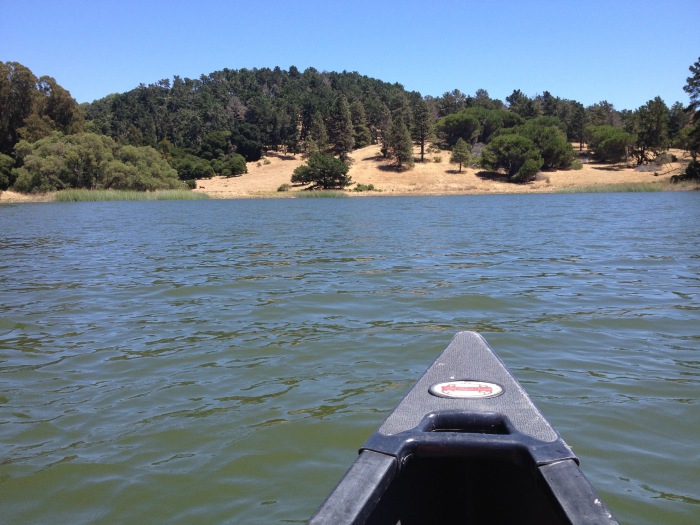 Anyway, after considering our options, we took the 4 year old out on the canoe. They do have two-seater kayaks, but that would require a child knowing a little more about paddling than 4 year olds probably can handle. The canoe let the adults paddle while the kiddo sat in the middle, trailing her hand in the water and asking us to paddle into the algae so she could “feel the green stuff.” We did let her paddle (see pictures) for very brief photo opportunities, but everyone was on high alert to make sure paddles were not dropped in the water. Pedal boats would work as well, but won’t let your kiddo get as close to the water, and for our small person, the pedals were too far for her feet to actually pedal. (One piece of beta gathered for you this summer is that I don’t recommend a pedal boat with one small child and one adult. It’s possible, but leaves your legs really, really tired.)

San Pablo Reservoir can probably be explored in 2-3 hours with some reasonably in shape canoers, but you could also just paddle across the reservoir and sit on the edge for a while, and then paddle back. (There are at least two portapotties on the other side of the reservoir from the boat rental dock, as an FYI.) It’s a lovely place to be out– we were there last Sunday, and while there were multitudes of families picnicking on one side of the reservoir, far less people get on the water, and it feels peaceful and relatively solitary in a canoe. This, in fact, is why you should take advantage of the waning summer (but really, we’re moving into the Bay Area’s Best Weather Season, otherwise known as fall) and head out on the water. More birds show up (see Great Blue Heron below), and we saw catfish under our canoe when we went earlier in August. 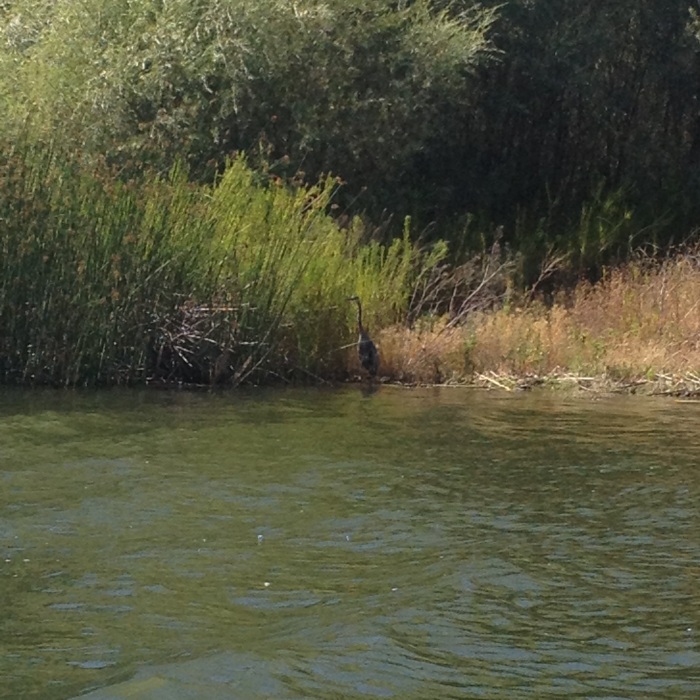 How young could your kid(s) be in a canoe? I think it depends on how willing they are to sit in the bottom of the canoe without standing up. I think we could probably have done this at 3, but again, see water safety worries above. You could also put two kids in the middle of the canoe without a problem.

While dogs are allowed at the reservoir, they can’t go in boats. 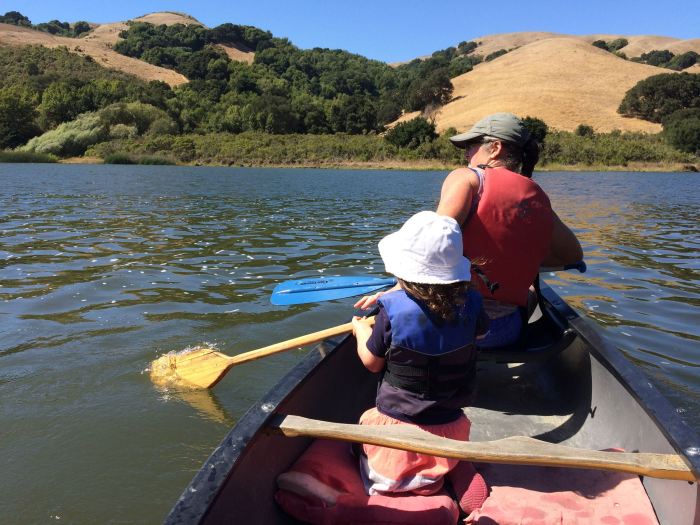