We love snow. This is a Bay Area website, but we’re going to cover where you can get to the snow for a day, in case you really want to get out to the frosty stuff but don’t have the time (or cash) for an overnight. This is clearly not an exhaustive list, but it’s a few of our favorite ideas if you have a long day available and want to have a snowball fight.

We’re most partial to snowshoeing because it’s generally FREE and easier for younger kids than cross country skiing. (Although one of us started x-c skiing at age 5, so it’s totally possible. Just takes some patience and commitment on the part of the parents.) It is also easier to carry a toddler in a pack than it is on skis, and you can explore the hills and mountains without having to wait in long lines or meander through hundreds of other people. And after all, this is a blog designed to inspire families to get out and explore, so we’d be doing a disservice to you, the reader, if we were to guide you to the places where all the crowds are. Furthermore, we firmly believe that the outdoors should be accessible to all, not just those with the income level required to buy lift tickets for the entire family on a weekend. We’ll focus on suggestions of where to go get your snow fix with a minimum of expenses and crowds, and a maximum of winter wonderland exploration. We’ve also found that many of the areas we frequent for snowshoe trips additionally serve as good sledding spots near the parking areas, with longer hills and less crowds than the typical roadside Snow Play areas that charge a fee. So we’ll be highlighting them rather than the aforementioned Snow Play areas. 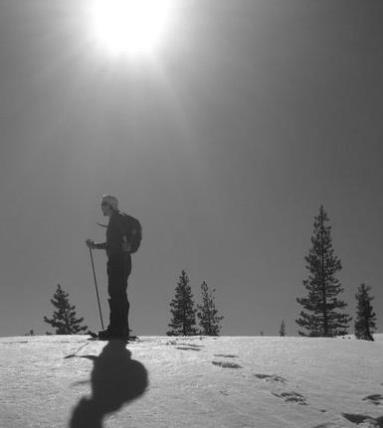 Snowshoeing is really easy for all ages. Here is an excellent primer from REI to get you thoroughly prepared and confident, should you have any doubts about trying it. If you don’t own a pair of snowshoes, you can rent them for a nominal amount, though if you plan on getting out more than a couple of times, it is more economical to buy some. Cross country skiing has a bit more challenging of a learning curve but still reasonably simple to become proficient. The below suggestions are applicable for either mode of transport, and are the favorite spots for each main corridor to the Sierra. Hope you get to enjoy them!

Also, the great thing about snow is that you can clearly see your tracks–provided you are not going out in a blizzard. We don’t recommend that. It’s not much fun with toddlers. This means that it’s pretty hard to get lost–just follow your tracks back to wherever you started from. Finally, there is a list of reminders of Things To Bring at the end of this post, but do not forget chains for the car (unless you have M&S rated tires, but it’s always good to have chains if a snowstorm could happen), SUNGLASSES and SUNSCREEN. On a sunny day, the sun can reflect off the snow and cause damage to the eyes or a terrible sunburn. I experienced this at age 10 from cross-country skiing. It was not fun.

Let me begin my musings on Tahoe with the caveat that you should never, never, never do a day-long trip that involves coming back from Tahoe on Sunday or the Monday of a long weekend. The traffic coming back to the Bay Area at the end of the weekend will make you never want to leave your area code. We tend to leave early Saturday morning, drive 2.5-3 hours to our destination, spend the day exploring, picnicking on trail, and playing, then back in the car on the way to a dinner stop by sundown. Pack some bread, crackers, cheese, salami, or whatever your favorite portable picnic items are and hit the road. We’ve heard a little red wine in a Nalgene water bottle is a nice touch as well. (We’re also fans of stopping at the Auburn Ale House for dinner on the way home, if you didn’t bring the wine in the Nalgene. Or maybe even if you did.)

About 2.5 hours from the East Bay up 80 East to get off at the Kingvale exit (about 20 miles before Truckee). Turn left at stop to go under freeway and another left on Donner Pass Rd to drive .6 mi to the parking area on the left at the freeway underpass. If it’s not plowed you have to start at the Donner Trail School lot which you pass on the way. (The Donner Trail School, when there is enough snow, can also be a great place for some sledding.) Head out on foot under the freeway and start a nice climb (which will serve as your sledding hill after the hike should you choose to hike first). Toward the top the trail intersects to the left which will bring you out for a few miles should you choose. See this book to learn more about the route. This route has an added bonus for young train fans in that you cross the railroad tracks after about 1 mile, and often can see a long train passing.

Less than 3 hours from the East Bay up Hwy 50 to Echo Lake summit. Follow the signs for the Snow-Park. You can park at the Snow Park (permit required– and don’t blow off this cost unless you want a ticket). The trail to Echo Lake is fairly easy– it’s an unplowed road that will take you to the lake (maybe a mile?). Once at the lake, you can either tromp around exploring until your people are ready for the return, or you can find the Tahoe Rim Trail signs and continue on the north side of the lake for, well, probably many more miles than your snowshoers will want to complete. (The complete Tahoe Rim Trail is 165 miles.)

This area is great for beginning snowshoeing and just some good snow playing. There are plenty of trails out of Carson Pass on either side of the highway (and enough people that you can just follow the tracks that others have left), but the best area, in my view, is the section between Carson Pass & Highway 89. (From Highway 50, take Highway 89 to the intersection of Highway 88 & 89, turn right on Highway 88 (toward Kirkwood/Carson Pass.) This area has some beautiful open spaces that are ripe for snow play/sledding. See a longer review here. Follow the leads of fellow snow players here. One of the best days of my life was a snow day with three teenagers where we just stopped and played in the snow with a $10 plastic sled. So fun, and much better than the often (insanely) crowded commercial snow-play areas.

There is an area on the west side of the highway, about 3-4 miles from the 88/89 interchange that can eventually head up to Crater Lake, but again, if you don’t get to all that, the wide expanse of snow makes for some good snowball fights, tromping around in snowshoes or generally enjoying the outdoors.

Oh Bear Valley, how I love thee. Bear Valley is not Tahoe. Not by a long, long shot. If you are looking for flashy casinos, foodie havens, or a place to buy an expensive puffy jacket, this is not your place. If you are looking for a place that is low-key and has enough opportunities for exploration to keep you busy for at least a day, it’s fantastic, and about 3 hours from the Bay Area.

If you want to pay (up to $25/person/day) to get onto some groomed trails, there is a Bear Valley X-C skiing center. However, you can pick up a sno-park pass at the Bear Valley Adventure Center and then go back to Spicer Reservoir. Spicer Reservoir has a long and unplowed road that is perfect for beginning snowshoeing. Go out as far as you can, then turn around and come back.

Beyond the Bear Valley X-C center, you can park where they stop plowing Highway 4 (you need a sno-park permit– pick one up at the Adventure Center) and then start exploring. While the road is very popular with snowmobiles (not included in our love of outdoor solitude, believe it or not), you can also veer off to explore in the trees where snowmobiles will not follow. Again, provided it’s not a blizzard, retrace your steps to get back to the car.

I have also been to Calaveras Big Trees State Park (between Arnold & Bear Valley) on heavy snow years (which we MIGHT be having this year!), and even found enough snow to play in/snowshoe a bit. Calaveras Big Trees State Park is a beautiful place– huge redwoods, with generally a fraction of the people found in other redwood-focused locales. They are also have a Winter Wonderland Carnival between Dec 25 and Jan 1– we have never been and it sells out fast, according to the website. If you’re interested, get on that!

Additionally, I just noticed that they seem to have opened several cabins IN Calaveras Big Trees State Park. The cabins are fairly basic (again, Tahoe swanky, it’s not), but they look completely serviceable for families. One of them sleeps 6-9, so you could even have two families! And the prices are reasonable– while it’s hard to figure out the prices without acting like you are going to rent a cabin, one that sleeps 4-7 people had a price of $175 a night.

UPDATE! We went here! It’s closer than both Tahoe AND Bear Valley. According to this handy website, there look to be several areas that require sno-park permits but which could offer multiple snowshoeing opportunities. We headed out to Herring Creek Road for some snowshoeing and snow play. We checked hard but couldn’t find any parking permit requirements (and didn’t get a ticket, so I think you’re good). This was a great place to play for the day– there was a good sized hill less than 1/4 of a mile up the road, and the unplowed road offered a good opportunity for some beginning snowshoeing. It looks like if you are on x-c skis or a really solid snowshoer, you can go farther… but it was beautiful even with our short snowshoe.

Finally, as with most kid-involved activities: take an extra change of clothes (maybe two changes? if you have them, especially extra pairs of gloves); layer up well– being cold makes snow days much less fun; bring plenty of fluids and snacks and quit while it’s still fun. We encourage you to search for places that allow you to stop in the midst of a snowy forest and listen to the quiet.

One thought on “Day Trips to the Snow!”